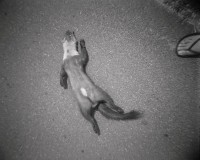 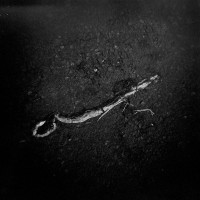 Evidence book is a project in progress (2008-) that through the photographic methodology consistently collects, documents and catalogs different variations of the same motive. Corpses of dead animals bound to decay are found along roads and footpaths, seashores and in roadside ditches; in the places to which people usually do not pay special attention. Occasionally images of discarded, lost or (in a way) dead items complement the series.

The series began some years ago, when a photo of a dead pigeon was intuitively captured on the street, and has grown into a systematic pursuit of related subjects at the places in the world where the artist lived or traveled: from Nepal to India, from Russia to China, Indonesia and in different parts of Europe.

The photographs are taken as if for a collection of evidence in the investigative procedures at the scene of the crime. The objects are photographed in situ, at the site where they were found, almost always from top, and mostly occupy a central position in the shot.

At the center of the artist’s interest is not to find the actual causes of death, but the phenomenon of death as a natural process. However, the series is not only an impartial collection of evidence, sometimes in the photographs the author’s legs appear, which act as a self-portrait. They represent the artist as a collector of evidence, as an eyewitness to the death that occurred and on the other hand, they show an intimate need to memorize something that was once alive, otherwise left to oblivion.

Evidence book can also be understood as a reflection of contemporary conceptions of death that pushes the dead body (human or animal) to the limits of social experience and it is often regarded purely as waste. It reflects the understanding of death as impersonal and alienated, but on the same time represents a non-subtle memento mori, a raw reminder of our own mortality.